*This post may contain affiliate links. This means I may earn a small commission (at no cost to you) if you sign up for a program or make a purchase using my link!

Abbey’s story began like most of yours. Before she founded The Virtual Savvy, she was just an expectant mother looking for the freedom and flexibility to leave her day job and work from home. Abbey stumbled upon virtual assisting, so she started by doing that on the side. When she was finally earning enough from it, she quit her full-time job and never looked back.

As she learned about coaching from the people she was assisting, Abbey began wondering if she could do the same. She started by creating courses on anything she thought people would buy. When she finally released them, she only sold one. It was devastating.

Abbey could have quit in that moment, and it’s often when people do. I’m so glad she didn’t. 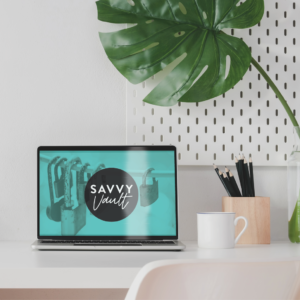 What is the SavvySystem? This is The Virtual Savvy’s signature Virtual Assistant program. The SavvySystem is a step-by-step blueprint for launching and growing your own profitable at-home business from scratch.

I know what it is to be comfortable financially, but I also know what it feels like to be broke. I’ll admit that my family and I have had times where we didn’t know how we were going to pay the bills. It’s SO stressful. You know you want to pursue entrepreneurship, but the fear…

Do you ever feel STUCK in your business?  Like your…

Are you thinking about starting a Virtual Assistant business but…

IN THE SAVVY STORE

This website uses cookies to improve your experience while you navigate through the website. Out of these, the cookies that are categorized as necessary are stored on your browser as they are essential for the working of basic functionalities of the website. We also use third-party cookies that help us analyze and understand how you use this website. These cookies will be stored in your browser only with your consent. You also have the option to opt-out of these cookies. But opting out of some of these cookies may affect your browsing experience.
Necessary Always Enabled
Necessary cookies are absolutely essential for the website to function properly. This category only includes cookies that ensures basic functionalities and security features of the website. These cookies do not store any personal information.
Non-necessary
Any cookies that may not be particularly necessary for the website to function and is used specifically to collect user personal data via analytics, ads, other embedded contents are termed as non-necessary cookies. It is mandatory to procure user consent prior to running these cookies on your website.
SAVE & ACCEPT