Check Out These EPIC Bonuses - Limited Time Only!

*This post may contain affiliate links. This means I may earn a small commission (at no cost to you) if you sign up for a program or make a purchase using my link!

Having issues with Smarterqueue, Hootsuite, Buffer, or MeetEdgar NOT sending out your scheduled posts? It could be because of the new Facebook Privacy changes.

Update: It has been reported that Smarterqueue and Hootsuite are now able to post to groups again.

These changes took effect on April 4, 2018, and will affect the way Facebook group owners interact with their groups in a BIG way.

On April 4th, Facebook announced a few BIG ways that they are going to further protect their clients’ privacy.

You can read the full post here, but I want to draw your attention specifically to the changes that will be happening inside of Facebook groups:

Groups API: Currently apps need the permission of a group admin or member to access group content for closed groups, and the permission of an admin for secret groups. These apps help admins do things like easily post and respond to content in their groups. However, there is information about people and conversations in groups that we want to make sure is better protected. Going forward, all third-party apps using the Groups API will need approval from Facebook and an admin to ensure they benefit the group. Apps will no longer be able to access the member list of a group. And we’re also removing personal information, such as names and profile photos, attached to posts or comments that approved apps can access.

WHY ARE THESE CHANGES BEING MADE?

Most of the new changes being made can be traced back to the Cambridge Analytica data privacy scandal.

On March 17, 201,8 a data mining firm named Cambridge Analytica exploited the privacy of over 87 million users. The company (a data mining firm from the United Kingdom) had improperly gained access to millions of users data from personal profiles.

Here’s a video on what happened, and a response from Mark Zuckerberg:

Since the scandal, Facebook has been frantically rolling out more security updates to ensure the privacy of their users. Facebook wants to ensure their user privacy so they decided to immediately apply new restrictions. These restrictions went into affect on April 4th, 2018.

These changes will have a large affect on the way that third party sources can access information on your behalf.

HOW WILL THE CHANGES AFFECT MY BUSINESS?

There are a few trickle affects that are already happening from the new privacy changes.

You may have read that the new Facebook changes “broke Tinder”, meaning that users were not able to log in due to the API login changes.

Here’s an example of the error received by those who tried to login: 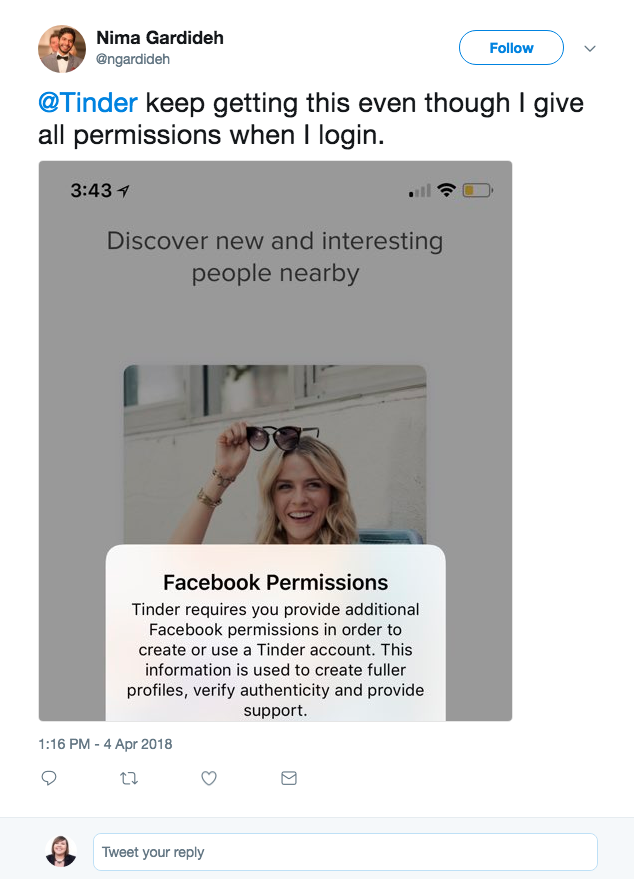 But those trying to hook up on Tinder aren’t the ONLY ones who are seeing direct effects from the changes.

For those of you who run online businesses where you use third party sources to interact with groups, you will see a big change in functionality.

For instance, an email was sent out from Smarterqueue on April 6th, 2018 to all users with the following functionality changes:

This means that all of those scheduled posts you have set up for your Facebook group? Yep – they most likely will NOT post using your third party software. You will have to go manually into your Facebook group to schedule your posts.

Here is how to manually schedule your Facebook posts inside of groups:

In addition to third party scheduling software, third party software used for going live inside of groups are currently not functioning as well.

Here is a message we received from BeLive, the program we use to go live inside of The Virtual Savvy Facebook group. 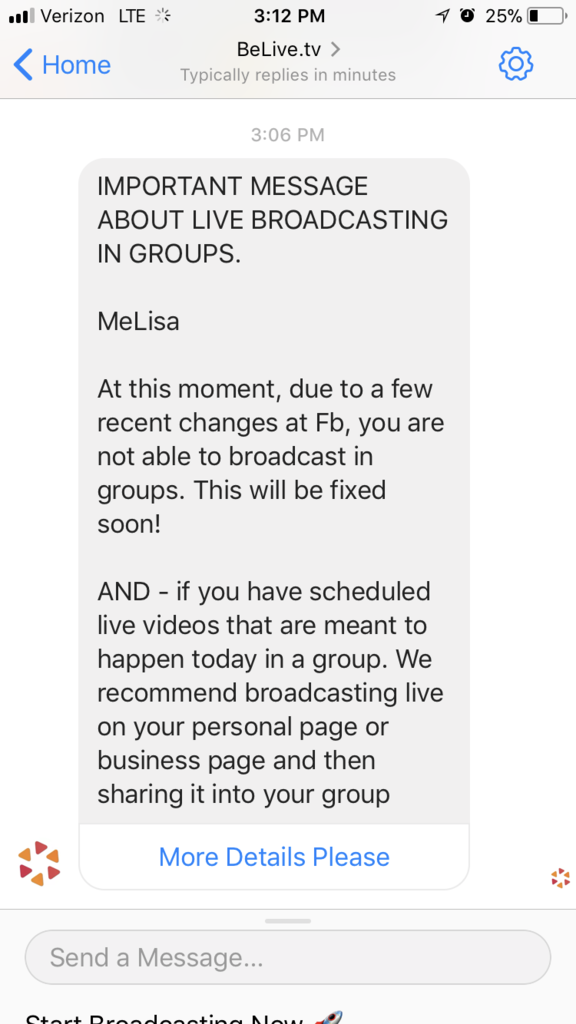 For now – you will have to go live using the normal LIVE feature on your desktop or mobile. Since Facebook does not yet support interviews via live stream, we will be sending our interviews to an outside source like YouTube LIVE using Google Hangouts on Air.

WHAT CAN I DO?

Rumors are that Facebook will be slowly approving more third party applications, so functionality may soon be restored for your favorite apps. In the meantime, here are my suggestions:

Remember – you can NEVER 100% count on the reliability of a software program or social media platform. Things WILL change. The success of your business is largely hinged on your ability to adapt to change. 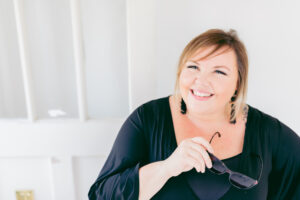 Do you ever feel STUCK in your business?  Like your time is stretched thin and clients keep coming in that just don’t value your worth? Maybe you want to scale your business but you just don’t know what to do next? If you’re answering “ YES” over there – I have just the thing for…

Are you itching to turn your service-based business into a full-time, profit-generating machine? Maybe you desire to finally quit your 9-5 and live the VA dream, but you don’t know how to even start scaling. Or maybe you’re booked out with clients already but have NO TIME left to actually grow your business. Regardless of…

Wondering how you can make money working from home as…

Are you thinking about starting a Virtual Assistant business but…

IN THE SAVVY STORE

This website uses cookies to improve your experience while you navigate through the website. Out of these, the cookies that are categorized as necessary are stored on your browser as they are essential for the working of basic functionalities of the website. We also use third-party cookies that help us analyze and understand how you use this website. These cookies will be stored in your browser only with your consent. You also have the option to opt-out of these cookies. But opting out of some of these cookies may affect your browsing experience.
Necessary Always Enabled
Necessary cookies are absolutely essential for the website to function properly. This category only includes cookies that ensures basic functionalities and security features of the website. These cookies do not store any personal information.
Non-necessary
Any cookies that may not be particularly necessary for the website to function and is used specifically to collect user personal data via analytics, ads, other embedded contents are termed as non-necessary cookies. It is mandatory to procure user consent prior to running these cookies on your website.
SAVE & ACCEPT